NASA WALLOPS FLIGHT FACILITY, VA –  Everything remains on track for this week’s launch of Northrop Grumman’s next private Antares rocket hauling the company’s next unpiloted commercial Cygnus cargo ship to the International Space Station (ISS) from NASA’s Wallops Flight Facility along Virginia's Eastern Shore - on a sure to be spectacular overnight blastoff Thursday Nov. 15.

Space UpClose recently took an exclusive UpClose tour of the next two Antares rockets being processed side by side inside the Northrop Grumman rocket assembly factory at Wallops known as the Horizontal Integration Facility (HIF).

Enjoy our exclusive Space UpClose photo gallery of the double dose of Antares rockets slated for commercial cargo launches to the ISS on the NG-10 mission on Nov. 15, 2018 and on the NG-11 mission in Spring 2019.
We also toured the Cygnus NG-10 cargo resupply ship up close inside the H-100 cleanroom High Bay processing facility at NASA’s Wallops, that will deliver over 3.7 tons of precious science and supplies to the orbiting outpost.

Antares liftoff is scheduled for 4:49 a.m. EST on Thursday Nov. 15, 2018, roughly 2 hours before sunrise and should make for an absolutely stunning sight along the Eastern seaboard – home to America’s most densely populated region.

We observed all the main components of both the NG-10 and NG-11 booster assemblies - including both the first and second stages of Antares as well as the RD-181 engines, interstages and payload fairings.

“We are on target to launch Antares and Cygnus on Nov. 15 at this time,” Kurt Eberly, Antares program manager Northrop Grumman VP, told Space UpClose in an interview during the Antares and Cygnus tours at NASA Wallops in late October.


NASA and Northrop Grumman had to do some “re-planning” of the optimum “cargo content” of the Cygnus NG-10 ISS resupply mission - in the wake of the Soyuz MS-10 crew launch failure emergency last month from Kazakhstan on Oct.  11, explained former Astronaut and 4 time space flyer Rick Mastracchio, currently senior director of Commercial Resupply Services for Northrop Grumman.


What is the Antares & Cygnus rocket processing sequence leading up to launch?

“The Antares NG-10 booster is being processed in the HIF,” Eberly explained as we toured the facility.

“Antares is in position now and has completed its integrated systems testing. The stages are mated and its ready for Cygnus to be mated. The payload fairing is ready to go.”

The HIF is a huge rocket processing facility leased from NASA located about 1 mile (1.6 km) from the Pad OA launch pad.

“We are just doing some final systems testing.”

The core tank was designed and produced by KB Yuzhnoye and Yuzhmash in Ukraine, and shipped to Wallops, explained Eberly.

“The first stage is derived from the Zenit rocket family.”

It was originally designed as liquid fueled booster for the Soviet Union’s Energia rocket.

“The first stage is powered by two Russian newly built NPO Energomash RD-181 engines with independent thrust vectoring. They are fueled by LOX and RP-1 kerosene.

“They are test fired by Energomash in Russia and shipped to Wallops.”

They produce about 860,000 pounds of thrust, roughly 100,000 more thrust than the original Antares 100 configuration. They are throttled down at Max Q to maintain core integrity.

The original Antares was powered by two AJ-26 (NK-33) refurbished engines whose use was discontinued following the catastrophic launch explosion of the 3rd ISS cargo flight Orb-3 for NASA on 28 October 2014 and witnessed by this author.
“The second stage is a Castor 30XL solid fueled rocket motor.”

The Castor 30XL’s were originally built by ATK and acquired by the company then known as Orbital Sciences that then merged into Orbital ATK. It burns for about 156 seconds with approximately 107,000 pounds of thrust.

Overall Northrop Grumman is the prime contractor/integrator and responsible for integration, systems development, testing software and verification of the combined engines, core stage and avionics components to ensure they function properly and as designed for a successful launch campaign, Eberly elaborated.

“On Nov. 1 Cygnus is transported to the Wallops fueling station in a special dedicated container. After that it moves to the HIF for mating to Antares.”

“Then its removed from the container and rotated horizontally and placed on the separation system inside the HIF.”

“Cygnus is then mated to front of Antares.”

The processing team will also load the final cargo items into Cygnus after arriving inside the HIF.

“Then the rest of the final cargo load and late load items will be added after it arrives in the HIF around Nov. 1.

"We load the last cargo about three days before launch”.

"Cygnus will be mated to the booster. Finally the payload fairing will be added [to encapsulate Cygnus].”

“The payload firing is built by Northrop Grumman with a honeycomb core, composite face.”


We observed two different types of payload fairings on the factory floor.

For NG-10, the fairing interior already had mylar sheeting installed by technicians composed of a laminated aluminum polyimide substrate.


The NG-11 fairing has been significantly modified and upgraded to allow late load of critical cargo items such as biological samples on the launch pad using a mobile cleanroom, Eberly explained.


Plans call for Antares to roll to the pad sometime on Tuesday, Nov. 13, two days prior to the schedule Nov. 15 liftoff.


“After mating the Antares/Cygnus rocket is placed on the TEL [Transporter-Erector-Launcher] transporter and transported about 1 mile to the launch pad OA – about 2 days before launch.”


“Then Antares will go vertical and we will run a combined systems test – that tests out the interface between the rocket, the launch pad and the range.”


“We turn on all of our range and radiation systems to make sure it’s all looking good”.


What happens on launch day?


“Right before launch at T Minutes 3 we begin the auto sequencer, pressurize the vehicle, and ignite the engines and do a quick health check.


“Then we are off and running!”


How does this launch of the NG-10 compare to the prior mission in May?


“Overall this launch [of NG-10] will be very similar to the last one OA-9 [when the aerospace company was still independently operating as Orbital ATK] in May of this year 2018,” said Eberly


It takes 9 minutes to get to orbit and Cygnus will separate in flight. Antares is a quick 2 stage flight.


“We are looking forward to launching on Nov 15.”


The Cygnus NG-10 cargo freighter, built by Northrop Grumman Corporation, was christened the S.S. John Young - in memory of John Young who was NASA’s longest serving astronaut and passed away earlier this year in January at age 87.
The S.S. John Young cargo resupply freighter is jam packed and will deliver nearly 4 tons of research experiments and station hardware and crew supplies to the trio of astronauts and cosmonauts living aboard the orbiting science outpost after blastoff atop the 2 stage Antares 230 version rocket.
NG-10 counts as Northrop Grumman’s 10th station resupply cargo mission for NASA.
Among the research items on board will be the first integrated 3D printer and recycler and fabricator to aid NASA’s Deep Space exploration efforts.
“It will turn waste plastic materials aboard the station into high-quality 3D-printer filament to create tools and materials, a key capability for future long-duration space missions beyond low-Earth orbit,” according to NASA.
Cygnus will be loaded with cargo up to 3,450 kg (7,605 lb.) comprising science experiments, research gear, food, water, spare parts, crew supplies and vehicle hardware to support the Expedition 57 and 58 crews.
Cygnus will deliver vital equipment, supplies and scientific equipment to the space station as part of Northrop Grumman’s Commercial Resupply Services-1 (CRS-1) contract with NASA – totaling 11 cargo flights.

“NG-10 is the next to last followed by NG-11 next spring under the CRS-1 contract, said Eberly.

The prior Cygnus cargo freighter was successfully launched by an Antares 230 vehicle from Wallops on May 21, 2018 on the Orbital ATK OA-9 resupply mission for NASA before the company merged with Northrop Grumman.

Dr. Kremer is a research scientist and journalist based in the KSC area. 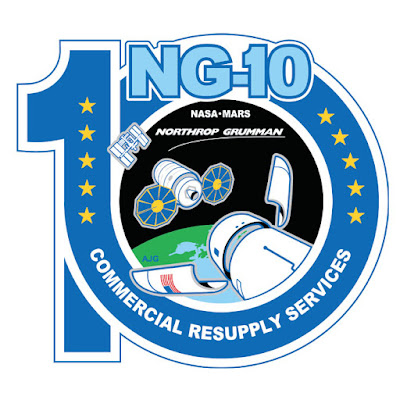