PORT CANAVERAL, FL –  Barely two days after last week’s launched and landed SpaceX Falcon 9 first stage arrived back home into Port Canaveral  on Monday, Nov. 19, technicians quickly completed all processing work on shore detaching the landing legs, tilting the legless booster 90 degrees from vertical to horizontal and transportation back to the Cape Wednesday, Nov. 21, for eventual reuse on another soar to space - from Florida’s burgeoning spaceport.

Overall it took the SpaceX work team just over 48 hours from the time this recovered Falcon 9 Block 5 first stage from the Es’hail-2 comsat launch arrived at the mouth of Port Canaveral’s channel standing upright on the OCISLY drone ship at noontime  Monday to its rotation level to the ground and mid-afternoon Wednesday trip back to Cape Canaveral Air Force Station  - just in time for the Thanksgiving holidays.


Perhaps this Block 5 version booster labeled 1047 will fly for a 3rd time in 2019.  Musk plans to fly these significantly upgraded Block 5 boosters 10 times with minimal refurbishment in between liftoffs.

Check out my Space UpClose gallery of eyewitness photos detailing virtually all the booster preparatory activities in between except for the leg disassembly carried out after nightfall, in between on Tuesday evening, Nov. 20.

Click back for more photos as the gallery grows.
These photos show the sequential tilting and lowering of the 15-story-tall SpaceX Falcon 9 first stage from vertical to horizontal over a timespan of about a 10 minutes from 1145 to 1155 a.m. EST Nov. 21 using a pair of cranes working on the recovered booster from the Es’hail-2 launch on Nov. 15.

The photos are dramatically backdropped by NASA’s iconic Vehicle Assembly Building (VAB) in these overhead views taken from Exploration Tower at Port Canaveral. 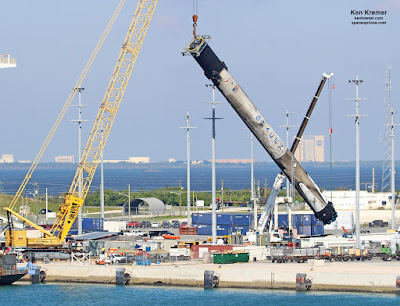 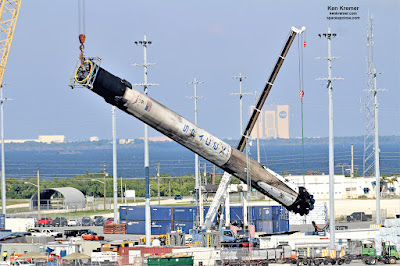 The booster was capped at the top with the high tech hoisting cap device we informally call the square shaped cage-like hoisting device the ‘Booster Lift/Leg Retraction Device’ or BLLRD.

The BLLRD was installed atop the booster on Tuesday morning and was used at lunchtime Tuesday to hoist it off the docked OCISLY from ship to shore onto onto the mounting cradle platform at the Port.

Here are some UpClose sequential views of the BLLRD taken during the processing, tilting, rotation procedure.


After it was rotated down horizontal, the 1st stage was held in mid-air by the cranes – making for a spectacular view - for a short period of time as the wheeled white transporter was driven beneath.

Then it was lowered into the transporters two cradles and additional mounting rings attached at front and back to securely clamp it down for the journey back to the Cape.

The BLLRD was carefully detached by the yellow crane crew at about 230 p.m. EST. Thereafter the open to the air booster was hooded with a black tarp at the top. 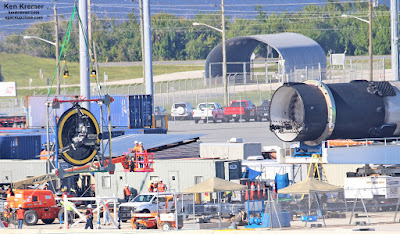 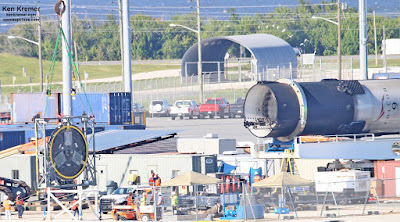 By 3 p.m. all that work was completed. Then the booster was rolled out of the Port work station and back to the Cape around 4 p.m.

The square-shaped cage-like BLLRD apparatus was noticeably different Tuesday from its prior incarnation and use on the recovered Telstar 18v booster in September.

The BLLRD was rather stripped down – a good indication that the SpaceX engineers decided to simply dissect off all 4 legs from the start rather than try and retract them experimentally like for Telstar 18v  - as CEO Elon Musk said was the ultimate goal to enable quick launch turnaround in as little as 24 hours for the Block 5 version of Falcon 9.

Noticeably absent were the pullies, cables and stabilizers installed on the square shaped cage - which still held the circular hoisting cap, and can be operated remotely. The BLLRD was raised into place by the crane operator around 8 a.m. ET Tuesday and mounted firmly. It is also apparently powered by a trio of solar panels – seen in side views. 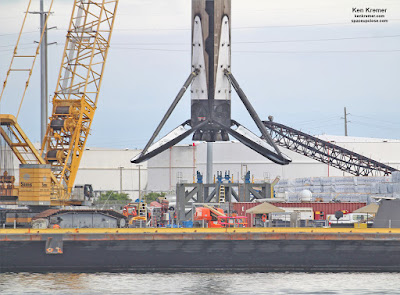 Thus far the cables have been used in experimental efforts to retract the landing legs.

In the end, the technicians made no attempt at all to retract the legs. That will have to wait for a future recovered Falcon 9 sometime in 2019.

Landing leg retraction was touted by SpaceX CEO and billionaire founder Elon Musk as a key improvement milestone toward the goal of achieving far faster turnaround of ‘Flight-Proven’ first stages for the significantly improved Block 5 version Falcon 9 vs. the older and now retired Block 4 first stages.

In fact Musk said he aims for his SpaceX team to launch, land and relaunch the same booster within a 24 hour period. 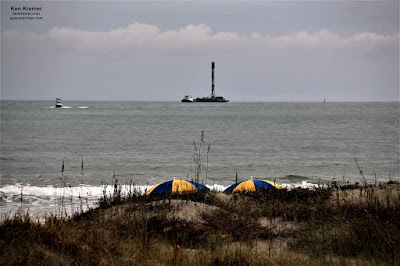 The 156 foot tall Falcon 9 first stage was standing virtually perfectly upright on the ‘Of Course I Still Love You’ (OCISLY) drone ship platform upon which it successfully soft landed propulsively at sea -  with all four landing legs fully deployed.

OCISLY was prepositioned some 400 miles (640 km) off shore in the Atlantic Ocean a few days prior to the scheduled liftoff.

The logos and American Flag stenciled on the side of the booster were also remarkably well preserved.

SpaceX launched the Falcon 9 carrying the six ton Es’hail-2 telecommunications satellite at 3:46 p.m. EST (2046 GMT) Thursday, Nov. 15, from pad 39A at NASA’s Kennedy Space Center. This marked the first daytime launch since May from Florida’s spaceport.

This reused booster was previously used to launch the Telstar 19V telecomsat on July 22, 2018 for Canadian-based Telesat.

The 229-foot-tall (70 meters) Falcon 9 successfully delivered the Es’hail 2 satellite for Qatar to its intended geostationary transfer orbit. Subsequently the satellite will be raised to geostationary orbit circling Earth 22,500 miles (36,000 kilometers) over the equator.

The precision guided rocket assisted soft landing of the 156 foot tall booster on OCISLY took place just over eight minutes after launch from KSC. All 4 landing legs successfully deployed in the last seconds. 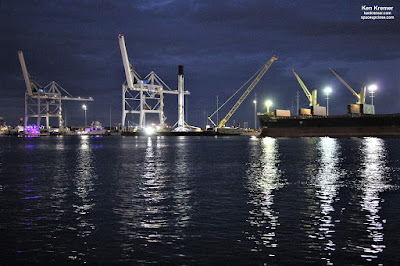 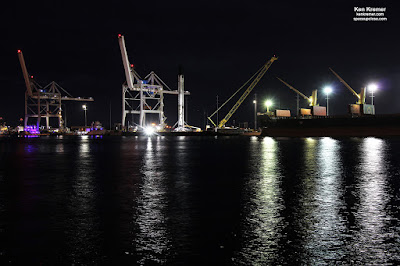 This landing counts as the 31st successful landing overall and the 18th by sea.

SpaceX’s next launch from Florida is slated for no earlier than Dec. 4 on the Dragon CRS-16 cargo resupply mission for NASA to the International Space Station (ISS).

Dr. Kremer is a research scientist, journalist and photographer based in the KSC area.